Environmentally Friendly Ways for your Body After Death! #PollutionFreeEarth 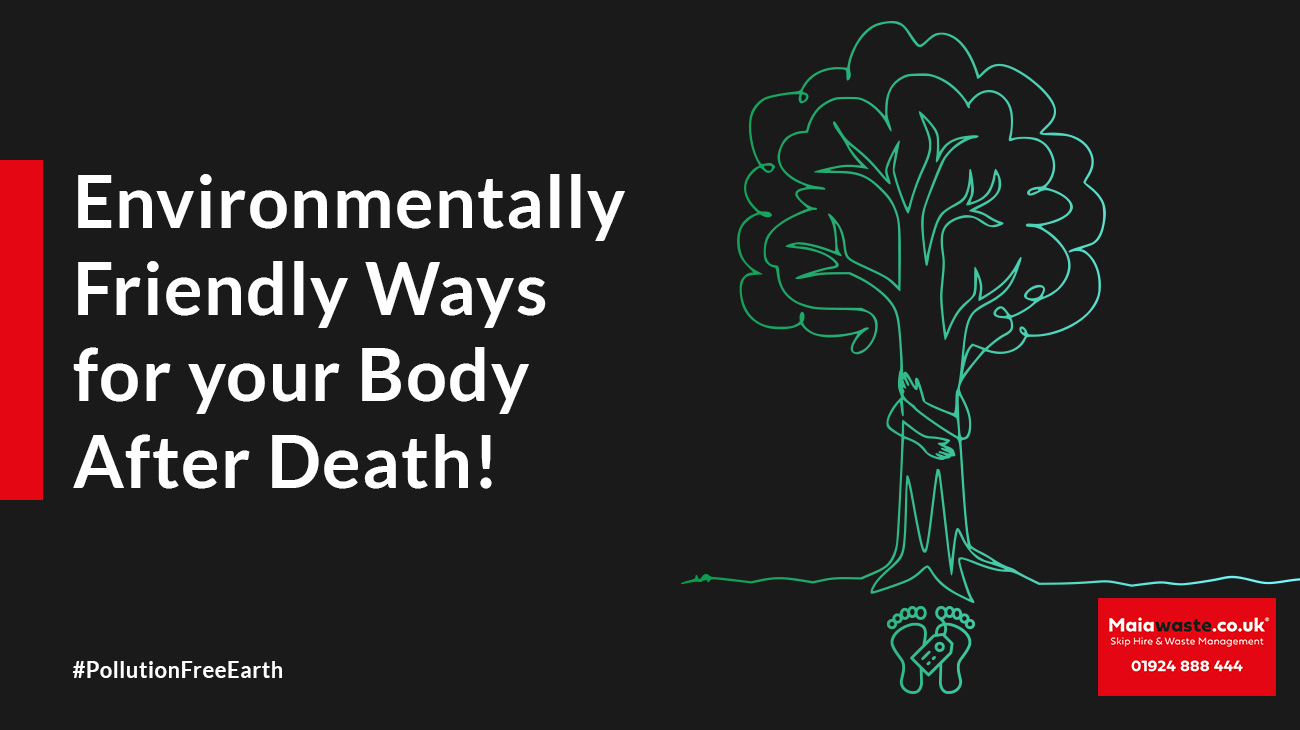 There are endless great works that one can do when he/she is alive, from doing charity work to doing something good for the environment. Yes, we’ve come up with a very interesting & very deep topic that can really do wonders for the place we breathe in – the environment. Death! If your thoughts are bursting with questions, then nothing to worry about. We will try to answer them all!

This blog does not intend to hurt any religious ritual or belief. The sole intention is to educate people about environmentally friendly death towards pollution-free earth through some eco-tips.

According to the Natural Death Centre, a single cremation consumes approximately the same amount of gas and power as a 500-mile road trip. The process also creates around 250 pounds of carbon dioxide, which is equivalent to the amount produced by the average American house in about six days.

Through this whole blog, you may get a clear picture & clarity to probably choose an environmentally friendly funeral before it gets too late. Traditional burial is possibly worse for the environment: Casket burials and the materials connected with them use 100,000 tonnes of steel and 1.5 million tonnes of concrete every year, as well as 77,000 trees and 4.3 million gallons of embalming fluid. One more concern is hazardous embalming fluid would ultimately seep into the environment, damaging water and soil.

The reason we are writing about the environmentally friendly cremation process is that Each cremation emits around 150 kilos of CO2. Cremations emit harmful compounds as well; a cubic metre of exhaust gases can include up to 200 micrograms of mercury, primarily from dental fillings. That’s why saying hi to an eco-friendly environment.

Aquamation, also known as water cremation or alkaline hydrolysis, involves placing the body in a stainless steel vessel filled with a solution of 95% water and 5% potassium hydroxide or sodium hydroxide.

A mix of gushing alkaline waters and temperatures about 350°F allows the body to dissolve in essentially the same way that a body left on the ground or in a stream would—except that what would take months in nature takes roughly 20 hours in an aquamation pod.

By the end, the skeleton, or parts of it, has been ground into a white powder with a pearly sheen. The remains are handed to loved ones, which can disperse them like ashes or keep them in a biodegradable urn.

We already know that burning a dead body can release high carbon dioxide that is being stored in the fuel & the body. That causes some serious environmental damage. While on the other hand, people go for water cremation as it produces a very low carbon footprint. That’s eco friendly cremation for you! Now you must be thinking about how it leaves carbon footprints? Because the water still needs to heat up.

According to the sources, such a process is legal only in a few countries and places like; Maine, Oregon, Florida, Illinois, and Minnesota.

Buddhists in Tibet and other nearby areas undertake a death ceremony intended to foster good karma. Their approach remains really practical. They transport bodies to charnel houses, where vultures feast on the flesh, returning to the world what was stolen in life: meat.

The ritual intends to encourage the dead to go on to the next life without being held back by their greatest attachment—their physical body. Aside from the ritual, it’s a practical solution due to the lack of wood and acceptable burial locations (the rocky earth makes it hard to dig).

Sky burials are a practice that is rarely being followed. Tibet can be the only place where such practice might be followed. And just because it’s rare, we have not come across any accurate studies & their impact on the environment.

One more thing, the Buddhist monks in Tibet normally do not like this practice to be seen by all. So, we can say that this practice can comparatively be called better than burning a dead body. The birds get a free meat treat & on a certain level, even the earth is not much affected.

Those who loved the ocean in life can return in death with a sea burial, following in the footsteps of Vikings, naval officials, and pirates alike. In addition to the several water-soluble urns on the market, a full-body can be cast adrift in authorised regions off the coast of the United States.

Though some burials include dumping a whole modified coffin onto the ocean floor, environmentally conscious enterprises such as New England Burials at Sea provide more eco-friendly (and cheap) solutions such as natural burial shrouds hand-sewn by New England sailmakers.

A full-day boat transports your funeral party out to sea, allowing for open or closed casket service before dumping the body. Cremated remains can also be mixed with environmentally friendly concrete by companies like Eternal Reefs to create artificial reefs that nourish marine life. Although not everyone would wish to sleep with the fishes, many sailors regard it as the most sacred of exits.

Of course, you would need a special permit for the Sea Burial. Of course, Sea Burials too intend to stop the potential damage to the environment.

William Bass, an anthropologist, wanted to examine how remains decay naturally in the early 1970s. He built a “farm” of donated cadavers for forensic anthropologists to explore a variety of body decomposition scenarios. What happens when a body rots in a swamp? What if maggots eat it? Crows? Welcome to the corpse farm, where nightmares come real.

Texas is home to the largest body farm in the United States, which is located on Freeman Ranch near Texas State University. The body farm has contributed significantly to advances in criminal science and thanatology (the study of death); it has aided in crucial discoveries such as the “microbial clock”—a procedure that allows the time of death to be precisely determined by analysing the posthumous microbiome.

After going through all the details from different research & sources, we can say that this practice helps. It helps in different ways. In comparison with burning the dead body, but obviously, this is better if we are keeping the environment & other benefits at the centre.

Go Green! Those who do not want to sleep with fish do not get worried. There is one more traditional option available. So putting it simply, the Green burial looks similar to normal burial only, except for a few major differences.

No embalming fluids or hazardous chemicals of any kind are permitted to be utilised. The grave is frequently dug by hand (either by the green burial ground staff or, if they choose, the loved ones themselves). There is no cement plot available. Only biodegradable caskets, such as wicker, are permitted to be used. Otherwise, the body is simply wrapped in an unbleached cloth shroud.

This permits the carcass to disintegrate properly and restore its nutrients to the Earth. Many green burial grounds also serve as wildlife refuges, providing safe havens for animals and natural plant life—families can beautify the tomb with a variety of live, wild grasses and flowers. We can say that this method is not just environmentally friendly but also quite an affordable option than the traditional methods.

What if you’ve given an option that your ashes will be used to grow a tree that will be dedicated just to you. Raoul Bretzel and Anna Citelli, two Italian designers, have designed a burial option that gives back to the Earth. The Capsula Mundi, which translates as “world’s capsule” in Latin, is an organic egg-shaped casket in which a body can be buried in the foetal position.

Once in the ground, the biodegradable casing degrades, allowing the remains to nourish a tree sapling planted directly above it. In many circumstances, the deceased’s loved ones chose a tree as their tribute rather than a gravestone.

The remains contribute to the creation of productive soil in a way that bodies confined in a casket cannot. Meanwhile, the resulting tree contributes to air purification. The founders say cremated ashes can also be deposited in the pods, and they hope that one-day cemeteries will be filled with trees instead of headstones.

We think there is not even any need to tell how great this can be for the environment. It goes without saying that such kind of Act is something that actually intends and makes efforts to change things around for a good cause.

Mushrooms are extremely popular among humans. Jae Rhim Lee, Coeico’s founder of the mushroom burial suit, prefers it the other way around. She’s designed a set of head-to-toe “ninja pyjamas” laced with unique mushroom spores to fit a dead body and gradually consume it. She claims that the mushrooms have been deliberately trained to consume dead human tissue.

Toxins in the human body can be returned to the environment through cremation and other methods of body disposal. Mushrooms have an amazing ability to absorb and filter pollutants, a process known as mycoremediation, leaving the environment cleaner than they found it. According to Lee, once the tissue is broken down, the mushrooms transfer nutrients from the body to a sophisticated network of fungi in the soil, which then transfers the nutrients onto trees.

Donating your body to someone or some scientific cause can also be a different kind of option. There are some of the processes that indirectly or directly grow trees from the body remains. And options like water cremation & even the Profession process ( Though there are no exact numbers or whether it is actually used or not).

Thankfully, environmentally Friendly Burials are coming into the picture all over the world except in some places and discussing such topics is also important, just like; waste management. At the end of the day, these topics are crucial for pollution-free earth. Even the one who first thought of environmentally friendly burials will be super duper happy to see that people are keeping a pollution-free environment.

It totally depends on how you take & even the death. This is one of those blogs where you may smile after reading it, & through this blog, you may think of the environment more seriously & based on that, you may act wisely in the coming times.

We are a waste management company, which gives top waste management services in Wakefield, Leeds, & West Yorkshire. Even in the waste world, there are certain things that must be reduced as the terror of trash too is harming mother earth. So, let’s realise & choose environmentally friendly ways in our life and an eco friendly gift to the environment.

We hope through this thought-provoking blog, your vision of the environment has been widened. Death is just one of the stages that we all are gonna go through. But how great it could be to protect the environment while breathing & even after your breathing stops forever.

Maiawaste© is a award winning family run skip hire and waste management company. Based in Wakefield West Yorkshire our CO₂ from our vehicles are now been-offset, By planting new ? Making The Maiawaste Group. A carbon neutral company