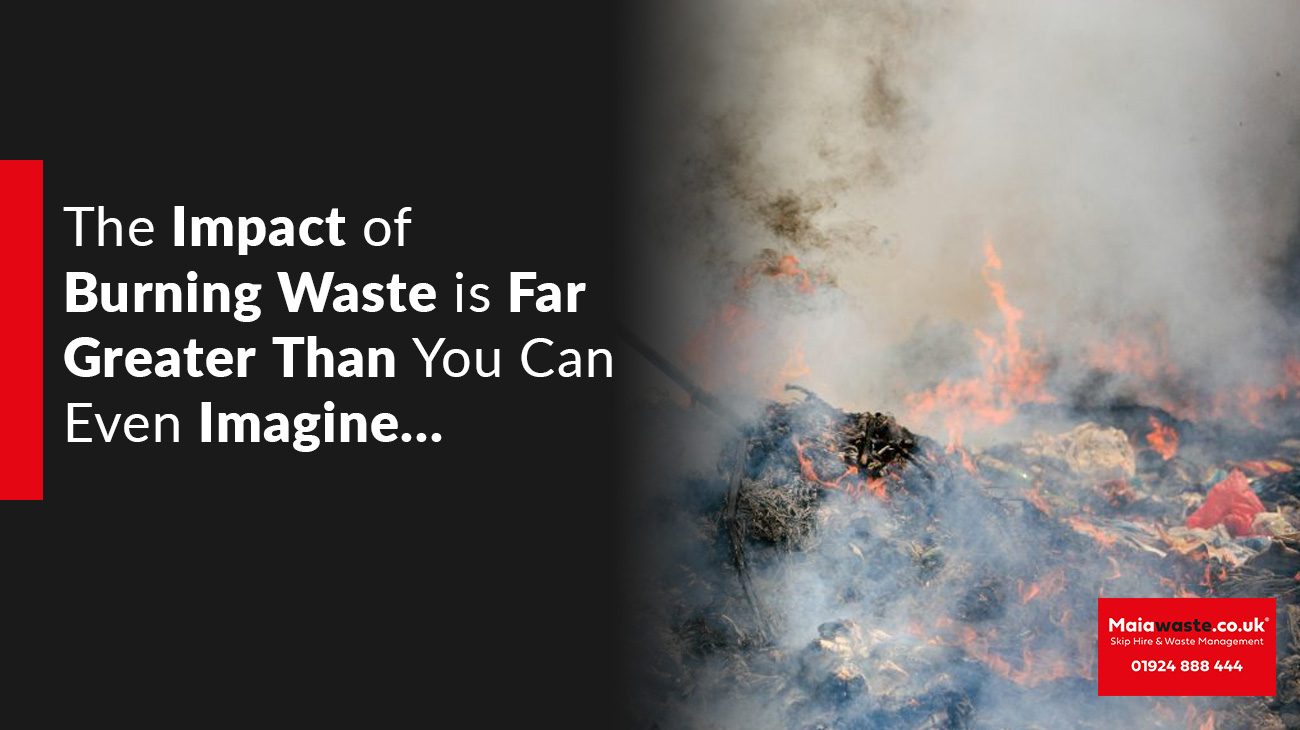 “When they burn we can’t breathe…. We’ve had to go to the hospital because of this.”

All open burning endangers the environment and public health. The air we breathe is polluted by deadly smoke. Our land, groundwater, lakes, rivers, and streams are polluted by ash. Burning anything in the open air can create tons of problematic effects. The risk that can be reduced by burning certified materials.

Over the last 50 years, the composition of municipal solid trash has shifted. Plastics and other synthetic materials have proliferated, whereas biogenic, biodegradable items such as paper and yard waste have decreased.

Plastics are especially troublesome for waste management because they are petroleum-based and nonbiogenic. They are difficult to disintegrate and, when burnt, emit dangerous pollutants such as dioxins and heavy metals.

So without any further ado, let’s start reading about the negative effects of burning waste & waste pollution!

You cannot just disregard an outward and vital organ of the body. The gases produced by burning garbage are more irritating to the eyes. When your eyes touch the fumes, they will always feel irritated. Exposure over an extended period may result in significant eye problems.

3. Contribution to the Climate Change

Proponents of incinerators point to their usage as power producers as a benefit, with the heat generated by burning provides cleaner electricity than fossil fuel sources. However, older incinerators generate power at relatively low-efficiency rates of 19-27 per cent, and a recent UK study discovered that conversion efficiencies of contemporary burning technologies are even lower.

Zero waste activities, on the other hand, such as recycling and composting, have the potential to save three to five times the amount of energy produced by waste incineration. When aluminium and steel cans, paper, printed materials, glass, and plastic are not recycled in the United States, the amount of energy squandered is equal to the yearly output of 15 medium-sized power plants.

According to a Greenpeace Unearthed research, waste incinerators are three times more likely to be erected in the UK’s most destitute neighbourhoods, and more than two-thirds of possible incinerators in England are planned for the country’s northern half. Incineration contributes to air pollution, and it appears that harmful emissions from incinerators, like many other forms of air pollution, are more likely to affect deprived communities and locations with a significant population of people of colour.

5. Flood of Plastics By Burning Waste

We must minimise the amount of waste we send to landfills, but rather than relying on short-term ‘plasters’ like incineration, the government must address the issue at its root and turn off the spigot on wasteful plastic production.

Other chemicals emitted during the burning of plastic include benzo(a)pyrene (BAP) and polyaromatic hydrocarbons (PAHs), both of which have been linked to cancer. If agricultural bags or containers contain pesticides or other dangerous substances, they will be released into the atmosphere.

6. The Effects of Mercury By Burning Waste

The natural movement of oxygen is hampered when garbage is burned in an open area. It will jeopardise an area’s ecological balance. As a result, all living organisms in that area would suffer. It contributes to the warming of the atmosphere. We’re all talking about global warming, but another aspect is directly related.

8. Can Cause Tremendous Smog

Smog is increasingly a typical occurrence all around the planet. It is directly related to the existing environmental contamination. Smog is simply a combination of fog and smog. Many cities worldwide regularly suffer due to it at particular times of the year. It causes visibility issues for pedestrians and motorists on the road. As a result, drivers must exercise extreme caution to avoid an accident. Smog is also extremely hazardous to one’s health. People feel suffocated, and it can occasionally become a serious problem.

9. The Risk of Spreading of Fire

It is not risk-free to light a fire in an open area. The fire has the potential to spread to surrounding areas. Such incidents are extremely prevalent, and numerous factors can contribute to them. For example, the wind direction can play a big role in propagating a massive fire. Once the fire begins to spread, it may endanger people’s lives and property, disrupt wildlife habitats, etc. So, it is better to think about it carefully before deciding to burn various sorts of waste by starting a fire.

Most materials in the municipal solid waste can now be composted or recycled, thanks to the growth of waste disposal options. This decreases environmental implications such as air, soil, water contamination, and greenhouse gas emissions.

Open fires can emit a significant amount of carbon monoxide (CO) into the environment. This particular gas is harmful to our ecosystem. This gas is lethal because it chemically interacts with sunlight once released into the atmosphere. As a result, it actively contributes to the production of free ozone in the environment. Everyone knows that the ozone layer shields us from the sun’s dangerous UV radiation. However, free ozone is not good for our ecosystem. The air at a particular location will suffer greatly as a result.

A single incinerator can burn hundreds of tonnes to thousands of tonnes of garbage per day. Smaller incinerators often have lower absolute emissions, but they can produce more dangerous pollutants per tonne of garbage. Plant emissions can also vary greatly depending on the diverse composition of municipal trash, the age and kind of emissions control equipment, and how well the plant is managed and maintained over time.

Burning rubbish is not the best way to solve waste disposal issues. There are more effective alternatives. You can, for example, contact waste removal services in Wakefield or waste management services near you to remove & clean up things in a proper way. Maiawaste© is a award winning family run skip hire and waste management company. Based in Wakefield West Yorkshire our CO₂ from our vehicles are now been-offset, By planting new ? Making The Maiawaste Group. A carbon neutral company